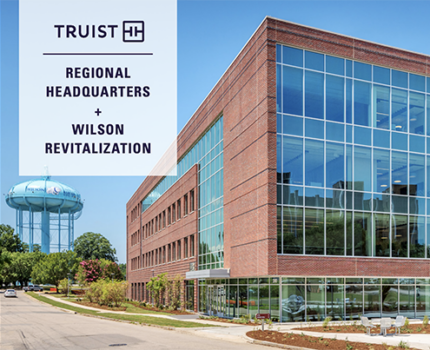 The Truist Regional Headquarters project in Wilson, NC is the winner of the 2020 Community Impact Award from CoreNet Carolinas which recognizes transformational projects that positively impact their communities. The Truist Regional Headquarters project served as the catalyst for a pivotal public-private partnership currently underway in downtown Wilson. The Bank’s commitment to relocate from its downtown towers and create a new regional headquarters building along Pine Street sparked the start of a new residential/retail mixed-use development and the Wilson Family YMCA. The Bank covered the costs to demolish and remediate old buildings, providing initial momentum for the $100 million investment effort that is expected to attract downtown residents – a long-term objective of the city.

Serving as a gateway into downtown, this ongoing redevelopment (starting with the Truist building and expanding two city blocks) will establish a path network for urban connections, weaving around buildings and giving way to pocket parks, a memorial fountain and prominent local artwork by Vollis Simpson creator of the renowned Whirligig Park. Focused on creative placemaking, this new era of redevelopment is aimed at rejuvenating the streetscapes and improving business visibility while bringing diverse communities together.