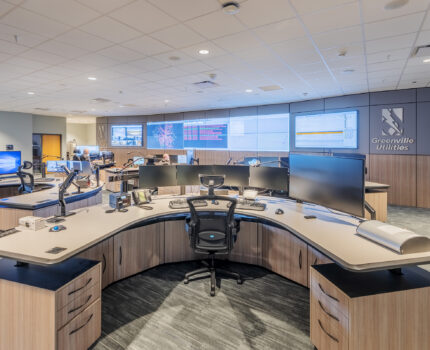 Barnhill’s Eastern Division recently completed work on a $43-million Operations Center for the Greenville Utilities Commission in Greenville, NC. The 82-acre campus is comprised of three buildings spanning 157,000 SF along with two large storage facilities and is defined by an open-office concept with considerable natural light. Building 4 along with Building 2, which contains the 24/7 Station 1 system monitoring for water, gas and electric utilities, was turned over seven weeks early to allow the owner to move furniture in while the building was being completed. The facility was fully operational in September.

“Barnhill put together an aggressive schedule from the start,” explains Kevin Keyzer, Risk and Facilities Manager at GUC. “The project team attacked the schedule from all angles to complete critical path tasks in order and to finish as many non-critical tasks as the project would allow in the slack. This approach kept the whole site active and insured a non-critical item didn’t hold up the project at the end.” This approach also allowed the team to meet GUC’s request for early move-in. With the project’s substantial completion date falling at the height of the Atlantic hurricane season and given the propensity of the Mumford Road site to flood, GUC was concerned about potentially being pushed out of their current operations center by rising water, only weeks away from occupying the new space. Understanding both the client’s concern and need to remain operational 24/7, Barnhill’s team leveraged the schedule to allow for early owner stocking of critical inventory items, furniture, boxed items and IT equipment which allowed GUC to move in immediately upon receipt of the Certificate of Occupancy.

Barnhill’s preconstruction efforts were vital to the project’s success. The team’s methodology included a comprehensive, systematic approach to preconstruction efforts to reduce the construction cost by $2 million and bring the project into budget. The value management process began early, with schematic cost estimates from Barnhill revealing the need to phase building out the site, explains Kevin. “Early cost estimating helped prepare the entire team (owner, designer, construction manager) for what would become a regular activity throughout each of the design phases – cutting cost. Barnhill’s approach to preconstruction cost estimating and value engineering allowed GUC to make many cost-saving decisions before the project was bid. The cost savings offered after the bids came, created confidence in the project’s ability to stay under budget and, in the end, resulted in the inclusion of some of the project’s add-alternates.”

Barnhill’s preconstruction team was able to get the project within budget within one week of bidding and eliminated any negative impact to the schedule. From preconstruction to final punch, the campus was completed in 18 months.

“Right from the start the team was committed to making this project successful by putting the effort into the preconstruction process to ensure the job would meet the functionality that the owner needed, for the budget they could afford,” adds John Smith, Eastern Division vice president. “Focus was put on building a relationship with our owner early and simply doing what we said we would do from start to finish. During construction, the team started strong and held the dates agreed to, while ensuring top-notch quality.”

As long-standing advocates for Eastern North Carolina, both Barnhill and GUC believe in supporting local businesses and industries throughout the region. More than 69% of the project’s total contract value was awarded to businesses located in Pitt County, injecting $29.7 back into the local economy and supporting more than 100 jobs throughout the life of the project. Moreover, the project includes a Regional Lift Station on the south end of the site, used to reduce the capital cost of sewer system construction, which will allow for the continued development of rural areas surrounding Greenville.

“Barnhill kept the project on track, under budget and ahead of schedule while overcoming significant challenges,” adds Kevin. “The timing of site activities and aggressive approach to sealing the essential areas on the site allowed work to continue through conditions that were not ideal. The positive working relationships formed during the months spent in preconstruction and final design rolled right into the construction phase where Barnhill’s team kept us well informed of both successes and challenges. When COVID-19 showed up, all necessary precautions were taken without missing a beat. Strong relationships with subs, Greenville Utilities, the project designer and owner’s representative allowed the Barnhill team to finish ahead of schedule and under budget.”

Congratulations to our GUC project team for finishing strong!